You may have heard of them: tough, inflatable rafts that pack to the size of a 2-man tent, are capable of class III whitewater and weigh 8 pounds, including life jacket and paddles.  Packrafts have been used by Alaskan hunters for years to hunt in remote locations.  They have used packrafts to float out everything from moose to Dall Sheep.  Hunting pressure in Alaska is growing and because of this the utility offered by packrafts only continues to increase and for the same reasons they are becoming a relevant option for lower-48 hunters.  With the Alpacka Caribou and Forager models that are specifically designed for hunting, they become an even better option.

Can you really retrieve big game in a packraft?

The simple answer is yes!  I (Matt) have done it successfully and written an article on the subject in Western Hunter and a couple other blogs, but since that time, Alpacka has come out with two models that were built for hunters specifically.  The Caribou for ultralight hunting (deer and smaller) and the Forager for big loads (moose and smaller).

Can I take a packraft to Alaska with me?

Most definitely!  In most cases, it makes more sense to ship it to you before you head for Alaska than for a direct shipment to Alaska, but we can do that too.  Give us a call 406-272-6468 to learn more about options if you’re venturing outside the lower-48. 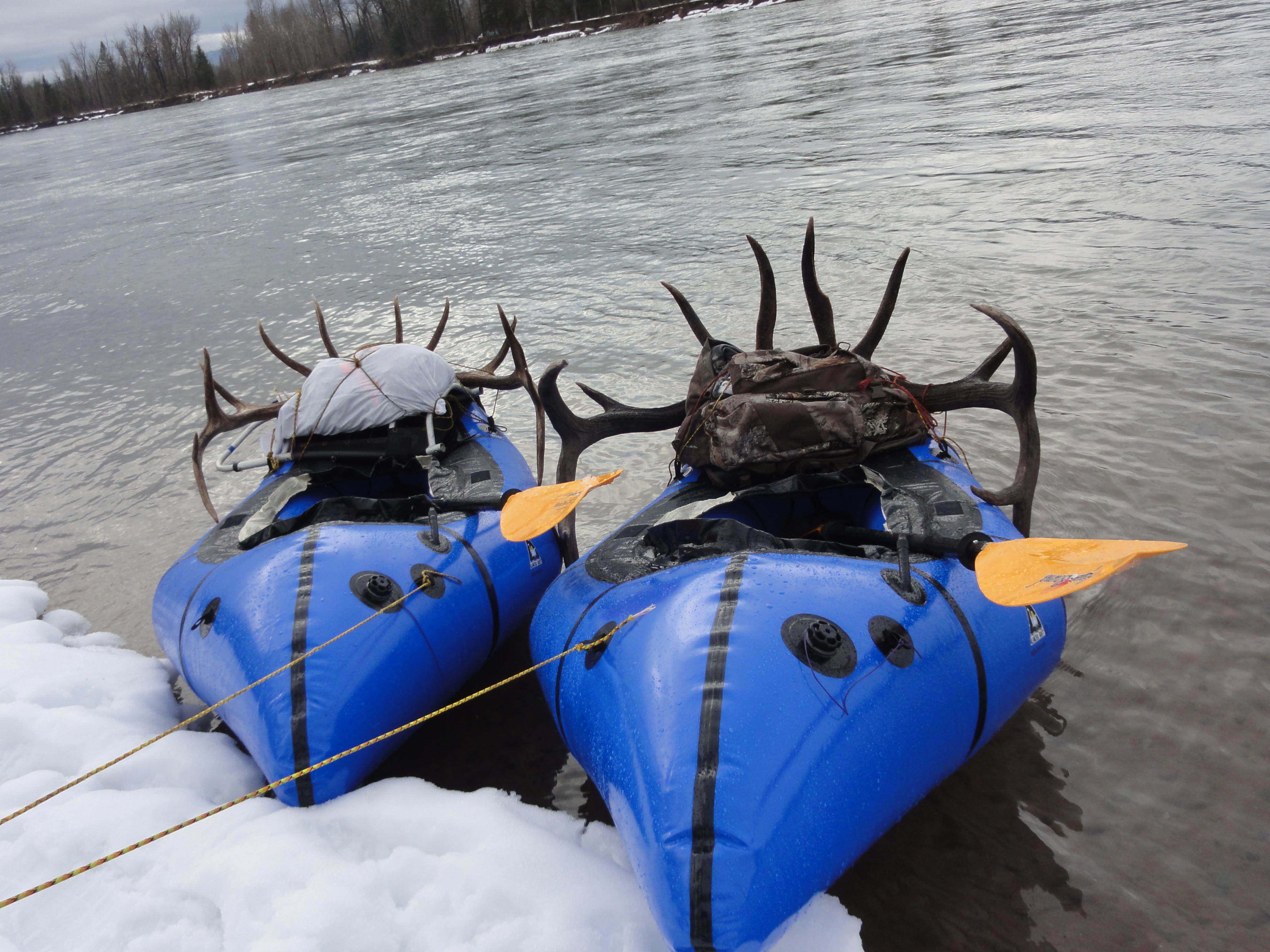 Not only do they make the pack out easier, they give hunters better access to the backcountry and hunting areas that are surrounded by private land and accessible only by water.  This can have implications for waterfowl hunters as well.  Last, but certainly not least, they maximize the weekend warriors’ hunt time by enabling them to hunt better spots with fewer days off.

You can use packrafts to float-hunt (float the river and stop to get out and hunt) in the same way you would a canoe, large raft or boat, but packrafts are absolute game-changers in several scenarios:

Ferrying Across Water to Difficult Access Areas: You have always wanted to hunt an area that is on the other side of un-fordable body of water which happens to be a couple miles from the road. You can pack in the packraft to the body of water, cross it, cache the packraft, and use it to cross back when you are done hunting. This would open up many areas that simply are not hunted because people generally do not wade across fast flowing rivers or swim across lakes to get to hunting spots.

Waterfowl Hunting: You can shoot from your packraft, retrieve downed birds, and even gain access to new areas that involve crossing water too deep for wading.  Some packrafts are even available in camo colors and with a little camo mesh and creativity you will have a maneuverable duck blind that can be packed wherever you want to go.

Custom Float-Hunts and River-Only Access Areas: You want to float-hunt a river, but the section you want to hunt is several days of floating from the nearest boat launch. Packrafts enable you to shorten traditional float hunts and plan the trip to suit your schedule by packing your raft to the best access point, with or without a road.  You can use this method to hunt areas that are otherwise land-locked by private land and accessible only from the river.  You can even cut off large chunks of floating that are unproductive for hunting by simply packing up your raft and hiking out.

Backcountry and Wilderness Hunting: You want to hunt an area 10 miles into the backcountry but are intimidated at the prospect of packing out game from that distance.  You can hunt your way to a river and then float out to a road or trail on that river. You can also hunt up a river and then float back down that same river. This scenario puts you hunting 10 miles from the nearest road with an easy method of game transportation, all in the course of a weekend!

Check out this blog on the topic.

The Realities of Load Capacity 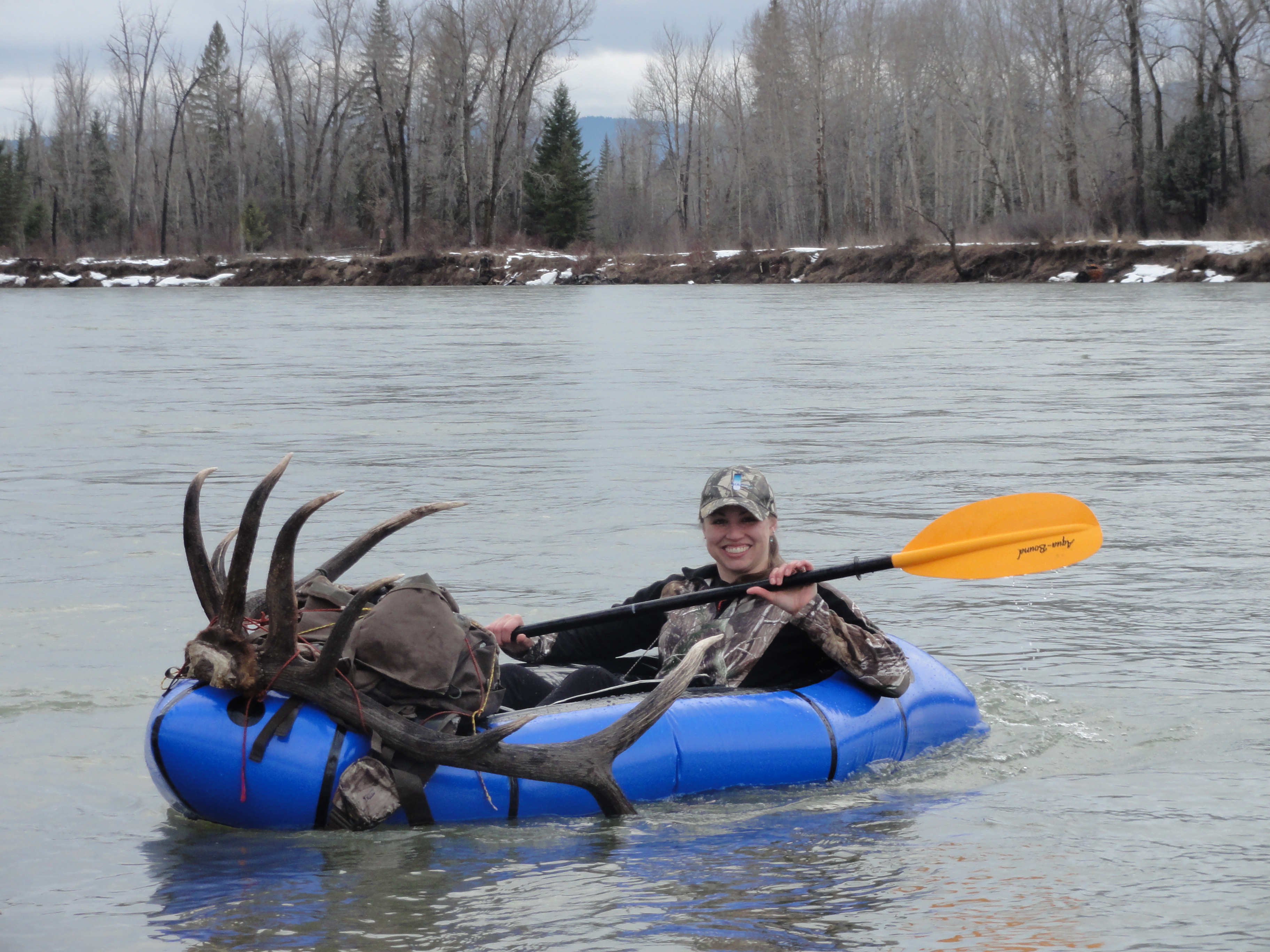 Denali Llama with Allie and the elk antlers

Ok, let’s deal with the biggest issue left on the table for big game hunters: load capacity. Can packrafts actually float out big game? There are three important factors that will help answer this question: type of water that must be crossed or floated, length of time on the water, and the total weight of the boned-out animal. For many animals commonly hunted in the lower-48 (deer, antelope, wild boar, turkeys), standard all-purpose packrafts or the ultralight Caribou will do the job of floating out your game, even on rivers with Class II rapids. If you are lucky enough to harvest something larger, like an elk or black bear, the forager or the gnu will do the job.

Check out our rafts and rental equipment!